Fullmetal Alchemist (Japanese: 鋼の錬金術師 Hepburn: Hagane no Renkinjutsushi, lit. ”Alchemist of Steel”) is a Japanese shōnen manga series written and illustrated by Hiromu Arakawa. It was serialized in Square Enix’s Monthly Shōnen Gangan magazine between August 2001 and June 2010; the publisher later collected the individual chapters into twenty-seven tankōbon volumes. The world of Fullmetal Alchemist is styled after the European Industrial Revolution. Set in a fictional universe in which alchemy is one of the advanced natural techniques revolved around scientific laws of equal exchange, the story follows two alchemist brothers named Edward and Alphonse Elric, who are searching for the philosopher’s stone to restore their bodies after a failed attempt to bring their mother back to life using alchemy. They are especially driven as Alphonse’s body has been entirely removed, and he now lives as a soul trapped in a lifeless armor, while Edward has exchanged his leg to attempt to bring his mother back, and his arm to tie Alphonse’s soul to a set of armor that was lying nearby.

Alchemists are knowledgeable and naturally talented individuals who can manipulate and modify matter due to their art. Yet despite the wide range of possibilities, alchemy is not as all-powerful as most would believe. Human transmutation is strictly forbidden, and whoever attempts it risks severe consequences. Even so, siblings Edward and Alphonse Elric decide to ignore this great taboo and bring their mother back to life. Unfortunately, not only do they fail in resurrecting her, they also pay an extremely high price for their arrogance: Edward loses his left leg and Alphonse his entire body. Furthermore, Edward also gives up his right arm in order to seal his brother’s soul into a suit of armor. 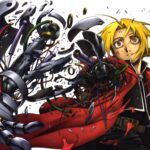